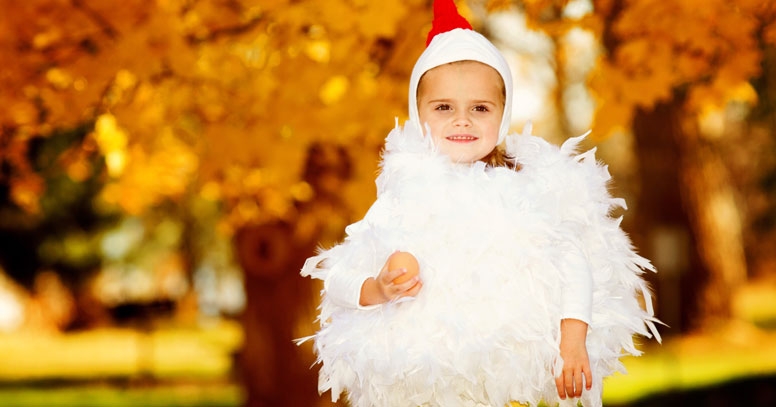 Create a Clever and Easy Costume

Trick-or-treating is a great time to tap into your creativity. The costume possibilities are endless but can also be very costly. These three no-sew, budget friendly costumes are sure to be a hit in your neighborhood.

It’s Raining Cats and Dogs! Well, it’s not actually raining cats and dogs. This costume is a cute spinoff of the common phrase. All you need for this costume is a kid’s sized clear umbrella, a few craft supplies, rain boots and a raincoat! What’s even better is that you can even re-use the coat and boots for rainy days after Halloween.

Corn on the cob is now more than a popular summertime side dish! It’s an adorable, four step no-sew costume. Create the corn kernels with painted egg containers and glue green felt to the outside of the kernels for the husk. Glue green pipe cleaners to the inside of the husk so that it can stand up on its own around the shoulders.

A cute chicken costume can be made with just an oversized white sweatshirt, a boa and a pair of rubber gloves. Start by cutting off the sweatshirt sleeves and hot gluing the boa to the shirt. This will create your cuddly feathers. Using a boa avoids the hassle of gluing each individual feather. To create the chicken’s comb, stuff the fingers of a red rubber glove! It’s that easy!

Have a safe and Happy Halloween!